The first quarter of 2022 was surprisingly volatile for the markets, with the S&P 500 dropping 10% before rallying to end the quarter at minus 4.6% and bonds unusually declining by 5.9%. Safety was not found oversees either as foreign markets dropped by 5.4%, in part because of the Russian attack on Ukraine (Figures 1 & 2). Compounding the unwelcome news from the markets was the acceleration of inflation to over 3% for the quarter alone and to 8.5% over the previous year (Figure 3).

The US economy has largely but not completely recovered from the staggering recession caused by the pandemic. In fact, economic growth in the first quarter technically declined 1.4%, but a granular reading of the data does not yet suggest a recession is imminent. Wage growth continues robustly, increasing annually by 6.7%, though in “real” terms it has lagged as current inflation exceeded nominal wage growth, and thus wage purchasing power actuallydeclined somewhat.

With inflation running higher than any point in the last forty years, we expect the Federal Reserve to act firmly to combat price growth through interest rate increases and reductions of their balance sheet. Though the Fed has not yet taken major steps in that direction, “forward guidance” by the Fed concerning their intentions has been sufficient for market participants to take action which is seen in the declines of both stocks and bonds. The accompanying charts show the declines in Q1 2022 for domestic and foreign stocks as well as the recent uptick in bond yields. After about forty years of declining interest rates, it appears that the economy may going to experience rising rates for some time (Figure 4). 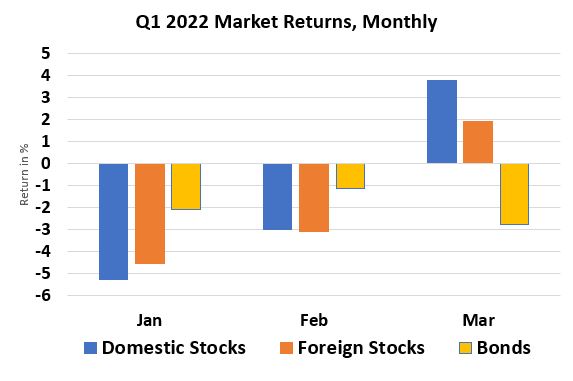 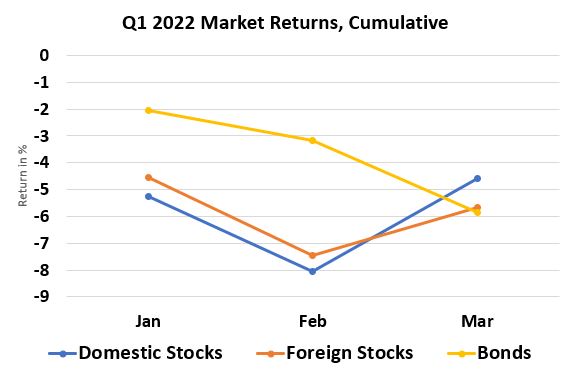 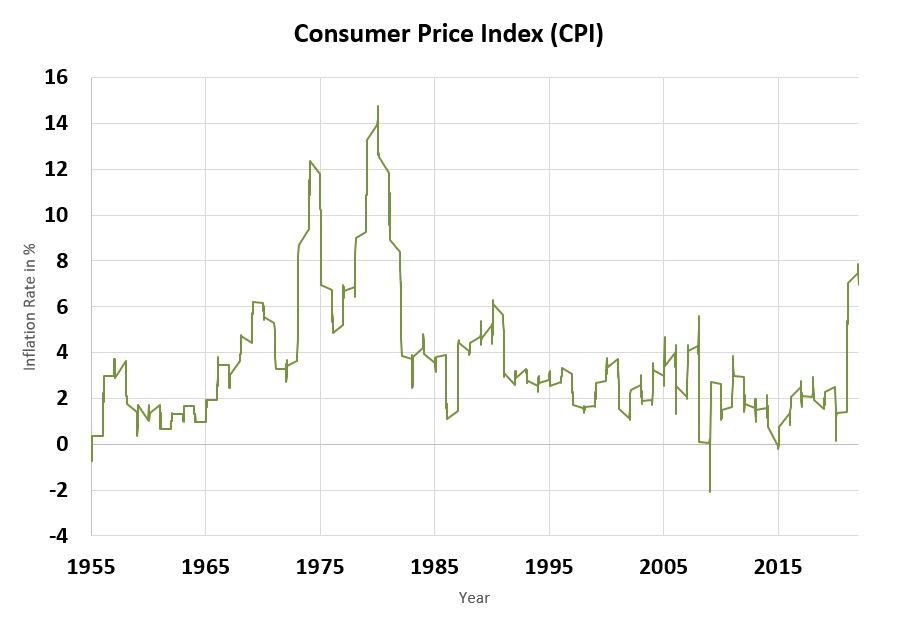 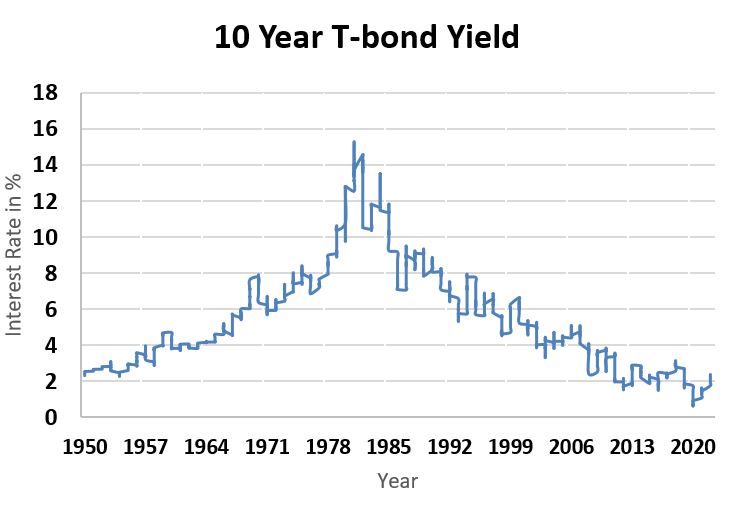 So, what is inflation, and how did we get here? Simply stated, inflation is the change in price of a good or service measured over a time period. If the price of a candy bar, for example, rises from $1.00 to $1.10 during a year, the yearly inflation for the candy bar is 10%.

Currently reported inflation, measured by the consumer price index (CPI) is about 8.5%, far higher than what was experienced over the past recent decades and far higher than the Fed’s target of 2%. The accompanying charts illustrate the CPI over time as well as the most recent measurements of the CPI.

The CPI is a “weighted average” of all expenditures of the “typical” American household; think of it as the “market basket” of goods and services that people need for day-to-day living (Figure 5). Notice that not all parts of the CPI rose 8.5% and that some rose considerably faster or slower than average (Figure 6). The “CPI Components by Weight” shows how much each component plays in the overall CPI calculation. As few households are the typical average, it is interesting to consider how the CPI components compare with any individual household’s actual expenditures. If, for example, you did not buy a “used vehicle” or did use more medical services than average, your “personal CPI” last year  would be much lower than the average 8.5%. Similarly, if you own your home and you have no mortgage or if the mortgage rate is fixed, then the “owners equivalent rent” (OER) inflation component is not really applicable as you have not experienced increased cash costs. (For econ nerds:  OER is based not on facts but on government surveys where homeowners are asked this question:  “If someone were to rent your home today, how much do you think it would rent for monthly, unfurnished and without utilities?”)  And, conversely, if you rent then the OER component does not apply to you. Bottom line – inflation is up sharply but everyone’s personal CPI is different.

The truly dramatic recent rise in inflation shocked most observers, but it was not at all unexpected by many (Figure 3). The US government has spent unprecedented amounts of newly borrowed money to provide a safety net for American families and businesses struggling during the pandemic. The Federal Reserve as well has printed new dollars for roughly all the government pandemic spending. At the same time, closures and disruptions of business enterprises domestically and globally during the pandemic led to supply shortages. And topping it all off has been the Russian invasion of Ukraine which led to boycotts of Russian oil and the inability of Ukrainian grain to reach overseas markets. Each one of these issues is inflationary by itself; when combined, turbo-charged inflation emerged over this past year. 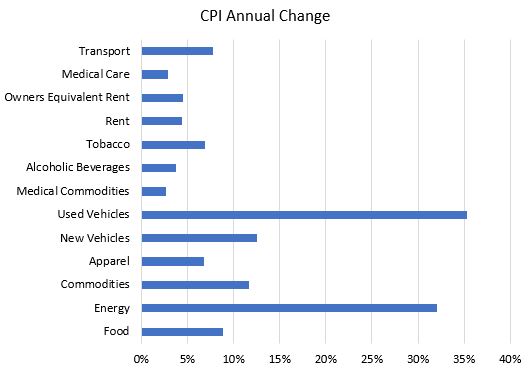 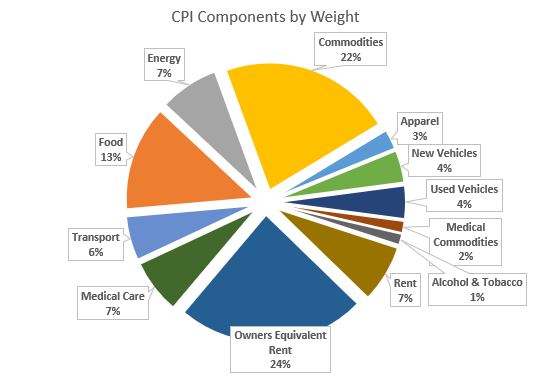 After 15 years of holding interest rates at or near zero, the Fed now knows that it must increase rates meaningfully in order to tamp down inflation. Indeed, analysts anticipate the Fed raising interest rates frequently this year and next in order to achieve a target rate of 2.75% by the end of 2023. By raising interest rates and thereby making loans more expensive, the Fed will incentivize the American people to save rather than borrow and spend, and as a result we should see lower consumer demand and thus lower inflation levels. Yet not all sources of the current inflation are directly addressed by higher rates and lower demand, such as the shortages from global supply chains and the Russian invasion of the Ukraine.

It is anticipated that raising interest rates will come at a temporary cost to employment and put downward pressure on the price of assets such as stocks, bonds and real estate. While higher rates may trigger a recession, the failure to raise rates could lead to a worse outcome with a longer period of sustained inflation at levels higher than the Fed’s policy target. The Fed is indeed between a rock and a hard place.

In this environment of higher anticipated inflation for some time, how do we invest wisely? First and foremost, a diversified global portfolio is central to a defensive strategy dealing with unanticipated price shocks. With US stocks currently much more expensive than foreign stocks, international diversification at this time is more important than ever.  Furthermore, in a heightened inflationary environment with expected interest rate increases, we expect returns to shorter maturity and inflation-linked bonds to perform better than longer maturity bonds.

We Look Forward to the Year Ahead

As always, we greatly appreciate the confidence you have placed in us to work alongside you as you financially prepare for your future. We invite you to follow us on Facebook, LinkedIn, and Twitter, as well as our RSS feed, where you can stay up to date on what we're readingand thinking.

A golfer wouldn't play a course with just one club in his bag. In the same way, asset classes help you diversify and optimize your portfolio.

Think of us as your personal quarterback to help you navigate and mitigate the blindsides of life.