Overall, the markets remained relatively flat or even slightly positive heading into September. However, volatility picked up once Congress got back in session. September was a negative month bringing the S&P 500 +.58% and the Dow -1.46% for the quarter.  International markets were also slightly negative at -.45%.

Congress is currently dealing with some very important issues including: the debt ceiling, passing a budget through the reconciliation process, more debt spending, and tax legislation. Some of these proposed changes may impact your tax situation. Thus, some of these items should be addressed as soon as possible before tax legislations change. Additionally, Jerome Powell indicated the Federal Reserve will start tapering as early as next month, reducing the amount of being borrowed by the Fed and slowing the monetary expansion. This would mean a reduction of liquidity in the system but should not have a significant impact on the economy.

In addition, the labor market remains weak. Businesses are facing significant problems recruiting new employees. According to the most recent payroll data, roughly 5 million workers are still missing from the job market. The Federal Reserve’s balance sheet has expanded two-fold within a short period of time and more people need to be working for the economy to continue its expansion. The economy must grow significantly to justify this monetary expansion. Yet as the economy is recovering, the average US consumer remain under pressure.

Here’s a summary of the latest proposed tax legislation from Congress:

In recent years, our debt has exploded through a combination of the COVID crisis and the unfunded tax cuts from 2017. The only way to address this is through substantial economic growth and increased taxes. The proposed legislation includes provisions to increase top marginal tax rates, increase corporate tax rates, and rework how capital gains will be taxed. The House Ways and Means Committee’s proposal is 800-pages, so there’s a lot to digest. We’ll share with you some key takeaways:

The biggest threat to worldwide economies right now is China The latest default of Evergrande is the latest symptom of the underlying crisis. China has a debt problem that the world does not fully comprehend. This is due to the lack of transparency by the Chinese government. Almost all statistics coming out of China are from the central government and approved by the Chinese Communist Party (CCP). The two are the same in China, so we’ll refer to the government as the CCP. The CCP does not allow these statistics to show a different picture than the party line and there is strong evidence that there is manipulation of the data. According to a recent study by Professor Frank Zhang of Yale University, “Chinese governments often inflate GDP figures in order to meet targets. Some officials may do so by pushing through projects without long-term economic value, such as unnecessary infrastructure investments, while others fabricate numbers outright.”

China’s growth in recent years has been financed by debt. To fully understand why this is the case, it is important to understand how governments and corporations run in China. Here’s a simplified version of what’s happening:

This cycle of finance needs to continue or the whole system will collapse. Thus, there is incentive for everyone through the entire value chain to keep it going, regardless of economics. When these improper incentives are in place, it encourages “bad” investments as Professor Zhang summarized.

According to the data, the largest borrowers are non-financial corporations. See the chart below. However, the true bearer of default risk are the Chinese banks and the CCP (see point #1 above). 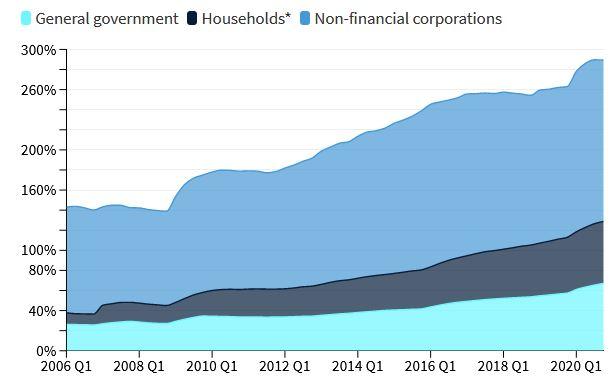 The threat to world economies is contagion. Contagion is defined as spread of an economic crisis from one market or region to another. If the debt crisis in China cannot be contained by the CCP, contagion could spread into other markets. It does appear that the default of Evergrande is contained for now. However, as more developers run into financial problems and default, it will become harder and harder for the CCP to contain.

We are still working in the office on rotation and plan to keep meetings online with clients through the remainder of the fourth quarter and into the first part of 2022. We will notify everyone when we resume regular hours. We look forward to seeing you in person again. Please stay safe and healthy.
As always, we greatly appreciate the confidence you have placed in us to work alongside you regarding your planning needs. Be sure to follow us on Facebook, LinkedIn and Twitter as well as our RSS feed to stay up to date on what we’re reading and thinking.

A golfer wouldn't play a course with just one club in his bag. In the same way, asset classes help you diversify and optimize your portfolio.

Think of us as your personal quarterback to help you navigate and mitigate the blindsides of life.